UBEF Lecture Series | Tibet’s Rivers and Climate Change: How Events in a Remote Area Affect Australia And the World

Tibet’s Rivers and Climate Change: How Events in a Remote Area Affect Australia And the World 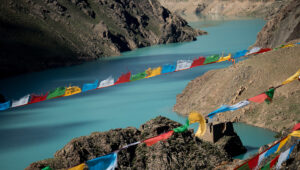 Tibet is one of the most significant global hotspots for climate change. Often referred to as the “third pole” because its glaciers hold the third largest reservoirs of fresh water on the planet, the Tibetan Plateau is warming at four times the global average, and its glaciers are melting at a rapid pace. This has implications for Australia, the Asia Pacific, and for much of the rest of the world. Hydrological patterns that begin in glaciers in the west of the Plateau follow the course of Tibetan rivers, which ameliorate their effects. They then descend into India and Southeast Asia, where they determine the amount and intensity of the rains of the Southern Monsoon. The monsoon ends its progress in northern Australia and peters out in the Outback. The vagaries of these weather phenomena also affect the Southern Oscillation, which in turn determines how much rain Australia receives in a given year. This presentation will focus on a research project funded by the Australian Research Council that aims to produce an environmental history of Tibet’s hydrological past, focusing on some of its main rivers. It also considers water management across the Himalayas and how it varies from region to region. Clearer data on the environmental past can serve as a comparator for present trends: are there past events that are pertinent to the current situation? Have there been similarly dramatic climate shifts that can be discovered from scientific studies and literary sources? The project takes an innovative approach to such questions: it brings together a team comprising scientists (two climate scientists and a surface water specialist), anthropologists, historians, and philosophers. The goal is to develop a large data set from past accounts (including historical treatises, autobiographies, religious works, and travelogues) that is correlated with scientific studies (ice deposits, sediment samples, tree ring analysis, pollen, etc.) that can be used to develop a more complete and robust vision of Tibet’s environmental past than what has been attempted to date.