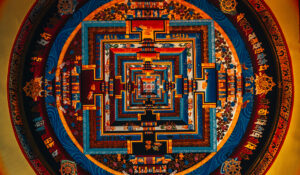 The Saṃdhinirmocana-sūtra (Discourse Explaining the Thought) is the main scriptural source for the Yogācāra (Yogic Practice) school, one of the two main philosophical traditions of Indian Buddhism. It consists of ten chapters, each of which features a tenth level bodhisattva who poses questions to the Buddha regarding qualms that have arisen among his followers regarding apparently contradictory statements attributed to him. They ask: “Blessed One, on one occasion you said X; on another you said not-X. What were you thinking when you made these pronouncements?” The responses are nuanced and often brilliant doctrinal reformulations, and chapter seven provides a hermeneutical strategy for making sense of all of the Buddha’s disputed statements. The sūtra is also the locus classicus for a number of influential doctrines, including “cognition only” (vijñapti-mātratā), the three natures/three characters (trisvabhāva/trilakṣaṇa), the foundation consciousness (ālaya-vijñāna), and what may be the earliest extant discussion of the problem of evil from a Buddhist perspective. In these sessions, we will engage in close reading of some of the most doctrinally significant sections of this influential text; we will also examine relevant passages in the canonical commentaries to see how these passages have been interpreted by the tradition that developed from the sūtra.

Knowledge of Tibetan is preferred, but not essential.

About the workshop facilitator

John Powers is a Fellow of the Australian Academy of Humanities and author of 18 books and more than 100 articles and book chapters, mainly focused on the Buddhist history of ideas in India and Tibet. His books include A Bull of a Man: Images of Masculinity, Sex, and the Body in Indian Buddhism (Harvard, 2009) and The Buddha Party: How the Chinese Commumist Party Works to Define and Control Tibetan Buddhism (Oxford, 2015).

To receive the workshop’s Zoom links and reading material, please register by sending an email to chris.clark@sydney.edu.au.

About the UBEF Visiting Professorship in Buddhist Studies

The University Buddhist Education Foundation (UBEF) Visiting Professorship in Buddhist Studies was established at the University of Sydney in 2009 through the generosity of the UBEF for the purpose of sponsoring an extended visit to Sydney of a distinguished international scholar in any field of Buddhist Studies in order to expose students and academics to current trends in research and to raise the profile of Buddhist Studies in Australia. It is administered by the Department of Indian Sub-continental Studies in the School of Languages and Cultures. Past recipients are Professors Peter Skilling (EFEO, 2009), Geoffrey Samuel (University of Cardiff, 2010), Karen Lang (Virginia, 2011), Bernard Faure (Columbia, 2012), David Eckel (Boston University, 2013), Richard Salomon (University of Washington, 2016), Lara Braitstein (McGill University, 2018) and Michael Zimmerman (University of Hamburg, 2019).

Also in the UBEF Lecture Series: