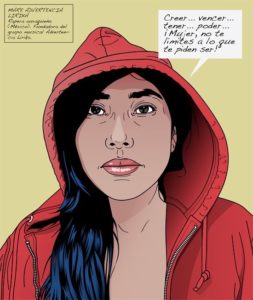 In a Mexican political context permeated by drug-related violence, organised crime, and violence against women and feminised bodies, young women with different class and ethnic backgrounds are using hip-hop culture to denounce the government and create consciousness in relation to feminicide in the country. This presentation focuses on the work of the female rap collective Batallones Femeninos (Women’s Battalions) which originated in Ciudad Juárez, Chihuahua, and Mare Advertencia Lirika, from Oaxaca. Immersed in heavily male-dominated hip-hop culture, the female rappers in my research emerge as openly feminist artists and position their feminisms with reference to very particular geographical contexts, and class and ethnic backgrounds. In the case of Batallones, their feminism is informed by specific experiences in el barrio (the hood), of Juárez and Mexico City, the influence of autonomous Zapatismo, and their travels through the country. Mare’s feminism is also influenced by her travels, but mostly by her identity as a Zapotec woman and the practices of comunalidad, characteristic among the indigenous groups of her hometown, Oaxaca.

Daniela Villegas completed her PhD in 2019 with the Department of Gender and Cultural Studies at the University of Sydney, where she has been a tutor and lecturer in units such as Youth and Youth Cultures and Screen Cultures and Gender: Film to Apps. She is a researcher interested in the intersection of feminisms, culture, and the Global South, mainly focused in the study of Latin American feminisms, mass media, youth culture and activisms. Feminist journalist and collaborator in the radio program Tiempo de Mujeres of Alternativa Latinoamericana in CFRU 93.3 fm, University of Guelph, Ontario, Canada.