The Department of Modern Greek and Byzantine Studies presents 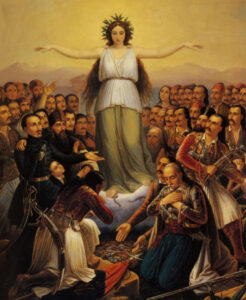 The Cultural Significance of the First Greek Constitution Epidavros 1822

The Greek revolution of 1821 was a great promise in an era of conservative rule and diminished expectations. It was not simply a nationalistic movement; it was predominantly a political and social uprising which disrupted the domination of autocracy and totalitarianism established after the defeat of Napoleon and the Conference of Vienna in 1815. It renewed the great promises of the American and French revolutions and brought their ideas for the first time into Eastern Europe and the Balkans, accelerating thus the process of fragmenting the surviving medieval empires by introducing the ideas of self-determination, self-government and citizenship.

Join our series of online lectures on this momentous event which changed the political map of Europe.

Professor Vrasidas Karalis is Department Chair and Sir Nicholas Laurantus Professor of Modern Greek at the University of Sydney. For the last 20 years, his main area of research has been in Modern Greek, Byzantine, Cultural Studies and more recently New Testament Studies. He has also worked in translation, especially of the Australian Nobel Laureate Patrick White and translated three of his major novels into Greek (Voss, The Vivisector, A Cheery Soul).