A lecture presented by the Departments of Japanese Studies, French and Francophone Studies and International Comparative Literature and Translation Studies

Paris nous appartient. Kafū’s French writings and the conceptualisation of the city as narrative 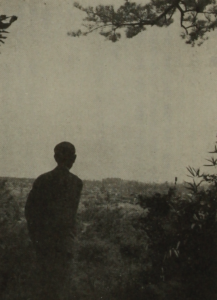 Nagai Kafū (1879-1959) travelled to China, the United States and France before returning to Japan and establish himself as a leading fiction writer. His literature displays a deep interest in urban spaces, that he considered a reflection of the current state of modernising Japan, thus the backdrop against which his critique unfolds. Kafū’s writing of Tokyo is original and diverse, grafted, as I argue, onto his personal memories of the cities visited abroad and the shared memory of previous representation in the arts.

I shall track down the major features of his French sojourn focusing on a number of keywords, such as “recognisability”, “landmark”, and “weariness” in order to clarify the role that France and French literature have played in the emergence of his sense of the city, and offer my interpretation of the complex relationship between memory, space, and ideology based on this influent Japanese writer’s work.

Dr Gala Maria Follaco, Ph.D. (2012), University of Naples “L’Orientale”, is Assistant Professor of Japanese Studies at that University. She has translated the works of several Japanese writers, such as Yoshimoto Banana, Yoshida Shūichi, Tanizaki Jun’ichirō, Hara Tamiki, Kawabata Yasunari, Matsumoto Seichō and published articles on urban representation in modern and contemporary Japanese literature. Her monograph, A Sense of the City. Modes of Urban Representation in the Works of Nagai Kafū (1879-1959) (2017), examines Nagai Kafū’s literary construction of urban spatialities from the late 1890s to the late 1930s. She has curated a translation of seven stories by Higuchi Ichiyō (1872-1896) and excerpts from her diaries (2016), and edited a collection of essays focusing on urban representation in several areas of Asia (2018).