Illustrating Terence: Lazzaro de’ Soardi and the legacy of his Venetian edition 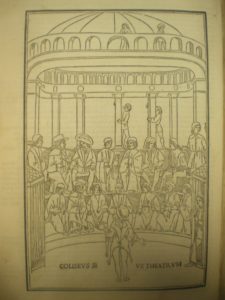 The first Italian illustrated edition of the comedies of Roman playwright Terence appeared in Venice in January 1497 at the press of Giacomo Pencio. The mastermind and financier of this enterprise was Lazzaro de’ Soardi, who printed subsequent editions of Terence in 1499, 1504, 1508 and 1512.  Considered merely a replica of the better-known Lyon Terence (1493), the Terence printed by de’ Soardi has received very little attention from scholars. This paper sets out to outline the aspects of originality of this edition and to contextualise it within contemporary performance practice. It also explores its legacy. Upon de’ Soardi’s death without heirs in November 1517, his printing warehouse was dismantled and some of his woodcuts were acquired by other printers. Between 1518 and 1526 four new illustrated editions were published in Northern Italy, attesting to the great potential marketability of this product nearly thirty years after its appearance.

Giulia Torello-Hill is a Lecturer in Italian at the University of New England. She specialises in the reception of ancient drama in the Italian Renaissance. Her research explores the interplay between exegesis of ancient texts, iconographic tradition and performance practice in Renaissance Italy. She has held fellowships from Villa I Tatti the Harvard University Centre for Italian Renaissance Studies in Florence (2015-16) and the Renaissance Society of America and Kress Foundation (2018). Her current book project, funded through an ARC discovery project, is an interdisciplinary study of the illustrated printed edition of the plays of Terence published in Lyon in 1493 (co-authored with Andrew J. Turner). This monograph study is under contract with Brill for their series Drama and Theatre in Early Modern Europe.