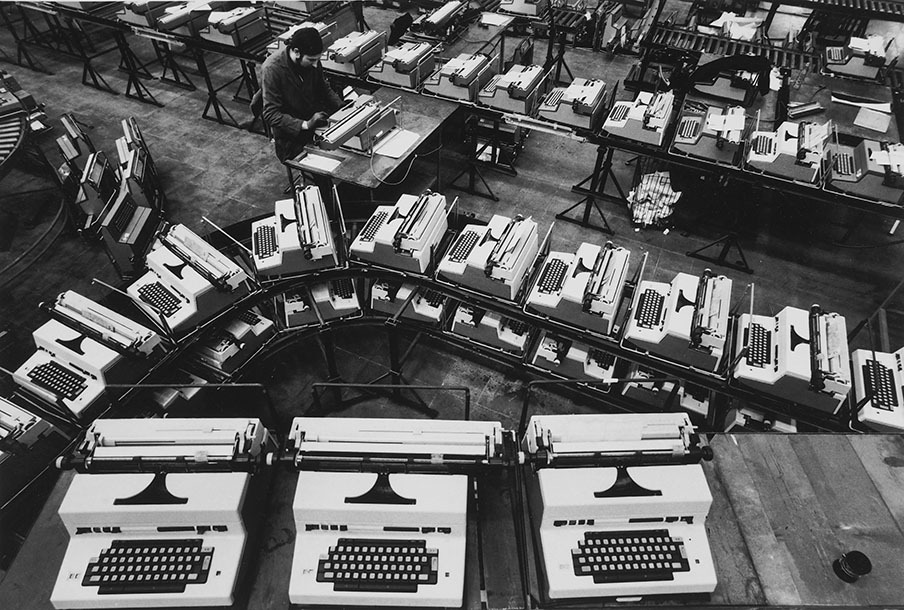 Gianni Berengo Gardin is one of Italy’s most important photographers. This seminar examines Berengo Gardin’s documentation of two different aspects of social change and ideals in the late twentieth century Italy in his photographs of the factories of Olivetti S.p.A. and of the protests at the Venice Biennale of Art in 1968.

The presentation traces the history of the photographs taken by Gianni Berengo Gardin between 1965 and 1990, in Italy and abroad, during his collaboration with Olivetti S.p.A.. Berengo Gardin is one of the photographers who collaborated most frequently with Olivetti which, in the last century, was one of the most important typewriter and calculator manufacturers worldwide. These photographs are mostly black and white prints, negatives, proofs, and transparencies preserved by Berengo Gardin Archive in Milan, and Olivetti’s Historical Archive in Ivrea (Turin). The images show not only the social environment inside and outside Olivetti’s factories both in Italy and abroad – from the production line to the company nurseries, canteens, infirmaries, and libraries – but also the architectures and their connection with the surrounding landscape.

The presentation examines the media coverage of the 1968 demonstrations or sessantotto in Venice, with a focus on the international reach of Gianni Berengo Gardin’s photographs of the protests. Throughout 1968, hundreds-of-thousands of students in Rome, Turin, Trento, Milan and Genoa protested against university reforms, the Vietnam War, and the impacts of capitalist society. Italy’s sessantotto came to Venice in June 1968 as artists and student protestors obstructed the opening of the prestigious Venice Biennale of Art arguing that art must not be reduced to ‘a product like Coca-Cola’. Gianni Berengo Gardin’s photographs of police and police violence in Venice’s iconic Piazza San Marco appeared in newspapers and magazines around the world providing a relatively small protest with a global audience.

Margherita Naim is a historian of photography. She studied art history, obtaining an Interuniversity PhD from Ca’ Foscari University and IUAV University of Venice (2016). She is currently adjunct professor of History and Technique of Photography and Film at the University of Turin and Academic Collaborator of the Photography Reference Library at the Kunsthistorisches Institut in Florenz. Since 2011, she has also taught Photographic archiving courses in Italian universities and conservation institutes. She recently co-curated the exhibition ‘Gianni Berengo Gardin and Olivetti’ at Turin’s CAMERA – Centro Italiano per la Fotografia, which presented Berengo Gardin’s industrial photography at Olivetti S.p.A. between 1965 and 1990.

Emma Barron is a cultural historian. She completed a history PhD in co-tutelle at the University of Sydney and the University of Bologna in 2016. Her recent book Popular High Culture in Italian media 1950-1970: Mona Lisa Covergirl (Cham, Switzerland: Palgrave Macmillan, 2018) examines the reception of magazines and television to show that high culture was integrated into Italy’s mass culture boom in distinctive ways. She is an Honorary Research Associate at the Australasian Centre for Italian Studies (ACIS) and has taught European film and history in the Department of History at the University of Sydney. The research in this seminar was undertaken through the ACIS-Save Venice Fellowship in 2019 and will be continued through the Ralegh Radford Rome Award at the British School at Rome in 2021.