Since the Islamic Revolution of 1979 in Iran, a massive number of Iranian writers have migrated to Western countries, including to Australia. They publish literary texts of all genres in both Persian and English. In this talk, I discuss the place of Iranian-Australian writers in the Australian literary field, their writings in both languages, and the reception of their texts. I first sketch the history of Iranian migration to Australia, describing its demographics and the characteristics of this diaspora. I then focus on the literary production and reception of texts written in Persian and in English. The predominance of texts in English reveals how much the Iranian literary community has adapted to the expectations of its Australian audience, using its language, English, and its preferred genres, such as memoirs and stories about seeking asylum. I argue that Iranian writers in Australia – perhaps because of, rather than despite, the short history of migration – have adapted to their Australian readers quickly by using English and modes of writing preferred by Australian readers. This contrasts with the writings of Iranians in other diasporic locations, especially western Europe. I make frequent comparisons to texts of Iranians in other diasporic locations, mostly the US and France, to analyse the specificity of Iranian-Australian writings. The talk will focus on one section of my recently published book Iranian Literature After the Islamic Revolution: Production and Circulation in Iran and the World. 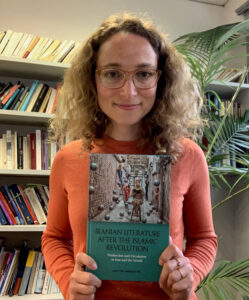 Dr Laetitia Nanquette is a Senior Lecturer at the University of New South Wales. She writes on modern and contemporary Persian literature. She is also interested in World Literature, print culture, translation studies, and digital humanities. She was trained in France, the United Kingdom, Iran and the United States, before coming to Australia. She has published two books: Orientalism versus Occidentalism: Literary and Cultural Imaging Between France and Iran Since the Islamic Revolution (I.B. Tauris, 2013) and Iranian Literature after the Islamic Revolution: Production and Circulation in Iran and the World (Edinburgh University Press 2021).