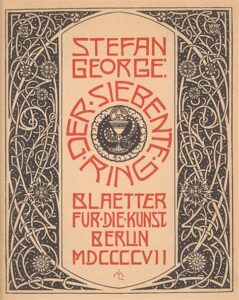 German poet Stefan George (1868-1933) was controversial in his time and remains so today. Interest in the poet and his influence has been strong over the past two decades. George’s homosexuality constituted a defining aspect of his poetic output and literary achievement. Yet it continues to be passed over in scholarly analysis.

The new social category of the male “homosexual” had been formalized with Kertbeny’s neologism of 1867 the year before George’s birth. George came to live this identity and to explore it in radical ways during periods of social upheaval and crisis in Germany. In doing so he provided a new form of social existence through his poetry to other homosexual men.

My study analyses how George created a homosexual “imaginary” in Charles Taylor’s terminology, in which he and the homosexual men who read his work could begin to understand and value their sense of a shared imagined social existence. This social imaginary enabled homosexual men to begin to move from subjective to objective identity, to the creation of a sense of belonging to a community, or Wir-Gefühl in Elias’ sense.

While George’s journey towards homosexual self-understanding took detours that proved illusory, even dangerous, it was the journey and the process of coming to self-understanding and self-validation that proved so powerful at the time. George’s evocation of a homosexual imaginary embracing masculine identity, companionship, love and affection reverberates powerfully even today, long after the historical details or persons and places have passed into obscurity.

Professor Peter Morgan is Director of the European Studies Program at the University of Sydney. Recent book publications include: Ismail Kadare: The Writer and the Dictatorship 1957-1990, and Text, Translation, Transnationalism. Most recent articles have appeared in German Life and Letters, The Modern Language Review, Journal of European Studies, Thesis 11, New Left Review, AJS Review.