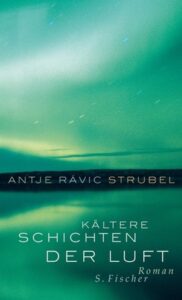 Expanding upon early feminist discussions of the “male gaze” of classic Hollywood cinema, scholars have theorised the multiple modalities of a “transgender look” or “gaze.” This involves considering trans(*) or transgenderism not just in terms of identity, but as a way of seeing that refuses to privilege the real over the figurative, and that can enable characters to “see through the present to a future elsewhere” (e.g. Halberstam, In a Queer Time and Place, 77, 87).

This paper draws on discussions of trans and queer gazing, embodiment and temporality to argue for a trans reading of Antje Rávic Strubel’s 2007 novel Kältere Schichten der Luft, set in a canoeing camp in Sweden, and her 2016 episodic novel In den Wäldern des menschlichen Herzens. It argues that the transgender gaze is cultivated as a space of both refuge and possibility for the protagonists of these two works, with the later novel pushing beyond the temporary glimpses of queer and trans utopias in Kältere Schichten toward more permanent, although never fixed, representations of trans embodiment. These works invite readers to look with rather than at trans and genderqueer characters. In doing so, they renegotiate understandings of pasts and futures, embodiments and desires.