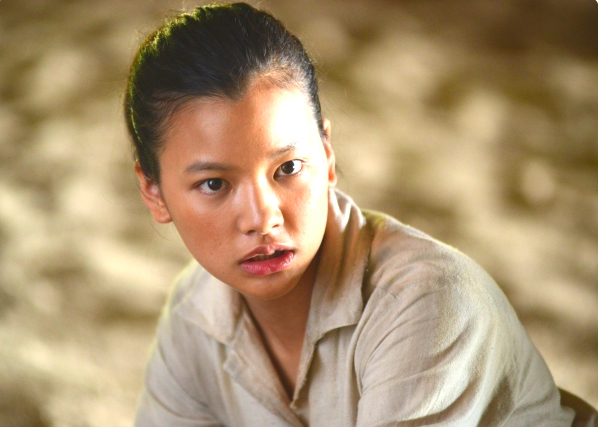 Free entry and all welcome with online registrations.
Star Sand is in Japanese with English subtitles.

It is the first week of April 1945. The Americans are bombarding Okinawa and have landed in their tens of thousands. But on a small island remote from the terrors of battle, 16-year-old Hiromi lives alone in a deserted house, day by day collecting star sand in little empty milk bottles left by primary school pupils. Suddenly she comes upon a cave where American deserter Bob has appeared. Bob is taken in by Japanese deserter Takayasu. Soon after, Takayasu’s elder brother Hajime appears in the cave. He is severely wounded and can barely walk. Hajime, a fanatic soldier, vows to kill his brother, his enemy Bob and the treacherous Hiromi once he recovers from his wounds. The three men continue to live together in the cave, with visits by Hiromi, as tensions mount to what appears to be an inevitable climax of violence and murder…. Star Sand is a thriller and mystery, set in Okinawa, with a startling ending.

Roger Pulvers, acclaimed author, playwright, theater and film director, translator and journalist, has published more than 50 books in Japanese and English, including novels such as The Death of Urashima Taro, General Yamashita’s Treasure, Star Sand, Liv and The Dream of Lafcadio Hearn. In 2017 the feature film of Star Sand, written and directed by him, had wide release throughout Japan. It was invited to screen at the Okinawa International Movie Festival and the Canberra International Film Festival; and has been broadcast on primetime Japanese commercial television.

Roger has worked extensively in film and television. He was assistant to director Nagisa Oshima on the film Merry Christmas, Mr. Lawrence, starring David Bowie, Tom Contiand Ryuichi Sakamoto. He also co-wrote the script for the Japanese film Ashita e no Yuigon (Best Wishes for Tomorrow), for which he won the Crystal Simorgh Prize for Best Script at the 27th Fajr International Film Festival in Tehran.

Roger wrote lyrics to two songs, “If” and “Why,” for British composer Michael Nyman. His English lyrics for the song of the Fukushima disaster, “Flowers Will Bloom,” has been performed and recorded by the popular vocal group “Il Divo.”

Roger received the prestigious Kenji Miyazawa Prize in 2008 and the Noma Award for the Translation of Japanese Literature in 2013; in 2018, Japan’s highest honor, the Order of the Rising Sun; and in 2019, the Order of Australia. Over the past 50 years he has translated prose, drama and poetry from Japanese, Russian and Polish. His plays have been widely performed in Australia, Japan and the United States, including his translation and adaptation of Nikolai Gogol’s The Government Inspector, which enjoyed a month-long run at the Sydney Opera House and a national tour in Australia.