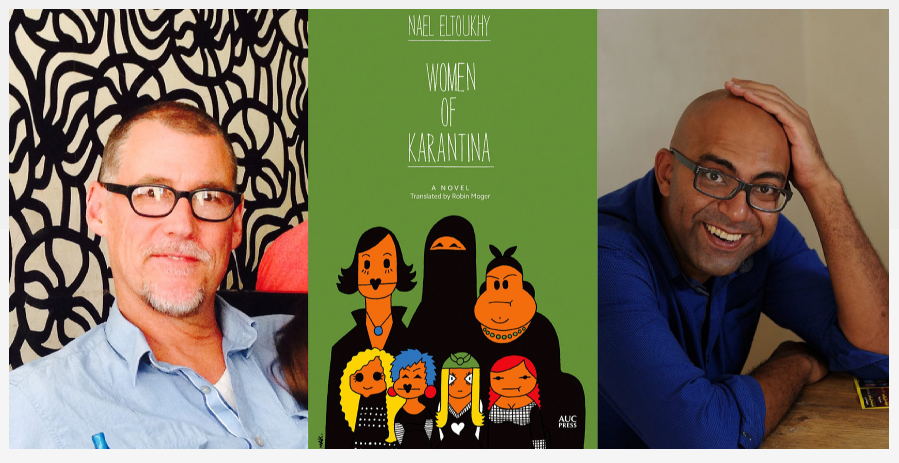 Crime Fiction and the Arab Cities. The Future is Now. Egyptian writer Nael el-Toukhi & American writer Elliott Colla are in conversation with Dr Lucia Sorbera about their world acclaimed novels, Women of Karantina and Baghdad Central respectively. Do not miss this special and exclusive event.

How to narrate war, crimes and the military occupation of post 2003 Iraq, or the atmosphere of Alexandria in Egypt after the 2011 Revolution, without falling into stereotypes and déjà vu? How to narrate the Arab cities in the 21st century?

Egyptian writer Nael el-Toukhi together with scholar and writer Elliott Colla will be in conversation with Dr Lucia Sorbera (Chair of Department of Arabic Language and Cultures) about their world acclaimed novels, both published in 2014: Women of Karantina (AUC Press) by Nael El-Toukhi and Baghdad Central (Bitter Lemon Press) by Elliott Colla. Do not miss this special and exclusive event in partnership with the University of Sydney Department of Arabic Language and Cultures.

Baghdad Central by Elliot Colla: Baghdad, November 2003. The US occupation is not yet a disaster but the CPA has disbanded the Iraqi army and decimated the police in its de-Ba’athification policy. Inspector Khafaji is a mid-level Iraqi cop who deserted his post back in April. Khafaji has lived long enough in pre- and post-Saddam Iraq to know that clinging on to anything but poetry and his daughter, Mrouj is asking for trouble. Nabbed by the Americans and imprisoned in Abu Ghraib, Khafaji is offered one way out — work for the CPA to rebuild the Iraqi Police Services. But it’s only after US forces take Mrouj that he figures out a way to make his collaboration palatable, and even rewarding. Soon, he is investigating the disappearance of young translators working for the US Army.

Women of Karantina by Nael el-Toukhy: Back in the dog days of the early twenty-first century a pair of lovebirds fleeing a murder charge in Cairo pull in to Alexandria’s main train station. Fugitives, friendless, their young lives blighted at the root, Ali and Injy set about rebuilding, and from the coastal city’s arid soil forge a legend, a kingdom of crime, a revolution: Karantina. Through three generations of Grand Guignol insanity, Nael Eltoukhy’s sly psychopomp of a narrator is our guide not only to the teeming cast of pimps, dealers, psychotics, and half-wits and the increasingly baroque chronicles of their exploits, but also to the moral of his tale. Defiant, revolutionary, and patriotic, are the rapists and thieves of Alexandria’s crime families deluded maniacs or is their myth of Karantina-their Alexandria reimagined as the once and future capital-what they believe it to be: the revolutionary dream made brick and mortar, flesh and bone? Subversive and hilarious, deft and scalpel-sharp, Eltoukhy’s sprawling epic is a masterpiece of modern Egyptian literature. Mahfouz shaken by the tail, a lunatic dream, a future history that is the sanest thing yet written on Egypt’s current woes.

Elliott Colla teaches in the Department of Arabic and Islamic Studies at Georgetown University and is currently researching the roots of 1970s Egyptian protest culture as a source of more contemporary contentious politics. He is author of Conflicted Antiquities: Egyptology, Egyptomania, Egyptian Modernity (Duke University Press, 2007), as well as many articles on modern Arab literature and culture. He has also translated works of contemporary Arabic literature, including Ibrahim Aslan’s novel, The Heron, Idris Ali’s Poor, Ibrahim al-Koni’s Gold Dust, and Rabai al-Madhoun’s The Lady from Tel Aviv. His 2014 novel, Baghdad Central, has been adapted as a Channel 4 television series.

Nael el-Toukhy is an Egyptian novelist, essayist, journalist and Arabic translator of Hebrew literature who is currently based in Berlin, one of the main hubs for Egyptian and Syrian writers and intellectuals today. He has published two novellas and three novels in Arabic. The English translation of his second novel, Women of Karantina (AUCPress, 2014), was longlisted for the fiction prize of the 2015 FT/Oppenheimer Funds Emerging Voices Awards. His most recent novel, Out of the Gutter, was published in Arabic in 2018.