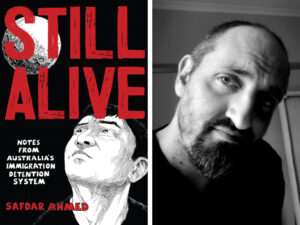 In early 2011, Safdar Ahmed visited Sydney’s Villawood Immigration Detention Centre for the first time. He brought pencils and sketchbooks into the centre and started drawing with the people detained there. Their stories are told in this book.

Interweaving journalism, history and autobiography, Still Alive is an intensely personal indictment of Australia’s refugee detention policies and procedures. It is also a searching reflection on the redemptive power of art.

Safdar Ahmed is a Sydney based artist, musician and writer. He works primarily in the mediums of drawing and comics, focusing on issues of representation and belonging with regard to language, religion and culture. He is the author of Reform and Modernity in Islam (IB Taurus, 2013) and the Walkley Award-winning documentary web-comic Villawood: Notes from an immigration detention centre. That comic was expanded and published as the graphic novel Still Alive. It details Australia’s treatment of refugees and was published by Twelve Panels Press in 2021. He is a founding member of not-for-profit community art organisation Refugee Art Project, for which he conducts regular art workshops with people of an asylum seekers and refugee background in their studio at Thirning Villa in Ashfield.