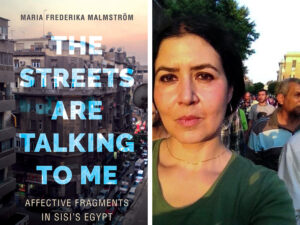 How do materiality and affect provide new possibilities for examining societies in transition? Maria Frederika Malmström explores the dramatic differences after the Egyptian revolution and their implications for society—the lack of sound in the floating landscape of Cairo after the ouster of President Mohamed Morsi, the role of material things in the sit-ins of 2013, the military evocation of masculinities (and the destruction of alternative ones), and how people experience pain, rage, disgust, euphoria, and passion in the body.

Maria Frederika Malmström is Associate Professor at the Centre for Advanced Middle Eastern Studies, Lund University, where she, in January 2017, started a collaborative research project The Materiality of Suspicion and the Ambiguity of the Familiar: Nigerian and Egyptian Cityscapes together with Professor Mark LeVine, Assistant Professors Ulrika Trovalla and Eric Trovalla. This 5-year project is funded by FORMAS. In January 2018, she started the research project Making and Unmaking Masculinities and Religious Identities through the Politics of the Ear in Egypt. The Streets are Talking to Me is her second book.