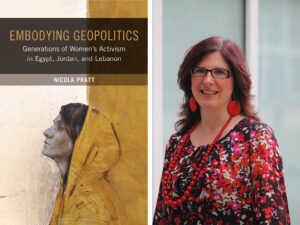 Professor Nicola Pratt is Reader in the International Politics of the Middle East at the University of Warwick (UK). Her research and teaching interests are located at the intersections between the politics of the Middle East and feminist international relations theory. She has researched and written on women’s activism, democratization, human rights and conflict in a number of Middle Eastern countries. Her most recent book, Embodying Geopolitics has been awarded the Susan Strange Best Book Prize by the British Society of International Studies in 2021.

When women took to the streets during the mass protests of the Arab Spring, the subject of feminism in the Middle East and North Africa returned to the international spotlight. In the subsequent years, countless commentators treated the region’s gender inequality as a consequence of fundamentally cultural or religious problems. In so doing, they overlooked the specifically political nature of these women’s activism. Moving beyond culturalist accounts, this book turns to the relations of power in regional and international politics to understand women’s struggles for their rights.